From saving the best version of the game for consoles to only getting one activation on Steam, PC gamers threaten to boycott EA… again.

Update: Since posting, EA has made a statement insisting that there will not be a one machine limit for FIFA 22.

EA has confirmed with Eurogamer that this was a mistake, stating "We can confirm there is not a one machine limit for FIFA 22 on PC via Steam. This was listed incorrectly and the limitation has now been removed. We apologise for the confusion and thank our community for noticing the error."

With many of the promotional materials for FIFA 22 focussing on the new “groundbreaking hypermotion technology” found within the game, it is not unreasonable for fans to become upset when these features were announced by EA to only be implemented on Playstation 5, Xbox Series X/S and Stadia. This leaves PC gamers to play the last-generation console version of FIFA 22.

Hypermotion reportedly includes advanced 11v11 match capture and machine learning to learn from match capture and create new animations in real-time and ensure that all 22 players on the pitch have realistic human movement.

Therefore, when EA released the game's trailer, which boasted “Powered by Hypersence Technology”, only to state in the fine print that it is only available on Playstation 5, Xbox Series X/S and Stadia, PC gamer’s were outraged.

This follows the problems surrounding FIFA 21 last year, in which console players were given a free update following the release of next-gen consoles, which never made it to PC. This update enabled advanced features such as atmospheric audio, EA SPORTS GameCam and next-level player realism. Unfortunately, not receiving this update had already soured PC players' feelings towards FIFA and EA as a whole.

Fans of FIFA, who had been waiting for an announcement to get their hands on the game, took to the internet to express their frustrations.

‘People need to #BoycottEA until they give us next gen FIFA on PC’ wrote Kalinho09 on Twitter, a sentiment shared by many on the website.

Yorkieplays similarly wrote, “Theres legit no reason for fifa 22 on pc to not be next-gen. Literally ludicrous.”

McHardy told Eurogamer in 2020 that PC gamers did not receive next-gen console versions of FIFA 21 to keep minimum PC requirements down - a move which is likely their reasoning behind using the last-gen version of FIFA 22 this year.

When we looked at what generation to put the PC game on, we looked at our fans and what capabilities they had with the hardware they have, and we have that information to understand what the power of the PCs out there in the world are. And when we looked at that, in order to run the [PS5/Xbox Series] game, our min spec would have been at a spot that would have left a lot of people out in the cold, not being able to play the game.

Yet, making PC gamers spend the same amount of money on an older version of the game isn’t the only problem that has arisen with FIFA 22’s Steam release. A member of the Steam subreddit noticed that, when looking at the steam page for FIFA 22, there is a note stating that there is a “1 machine activation limit”. 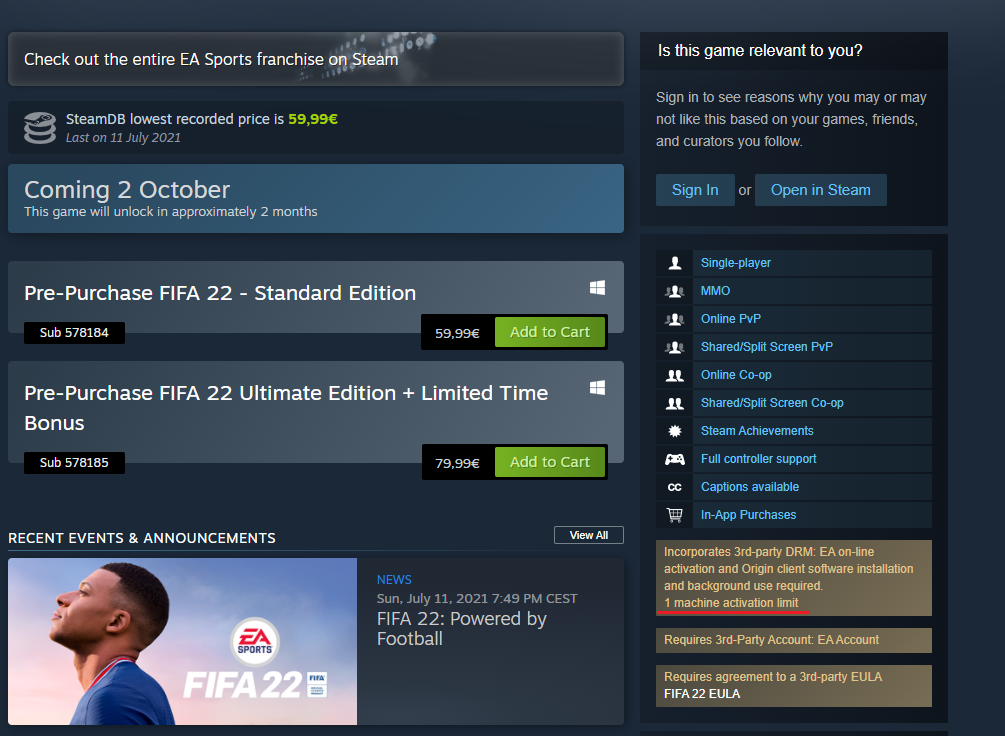 The single-use activation limit implies that FIFA 22 will be locked to the initially activated PC once purchased. This means that if you change your PC or want to use another machine, you will be unable to play the game. It is still unknown whether deactivating the initial download will allow it to be activated on another device.

The warning does not appear to be visible on Steam in the UK; Whether that is down to location or because EA has noticed the backlash and have removed the notice, we will have to wait and see what comes of the single activation limit on the game.

FIFA 22 will be released on all major platforms, including PC, on the 1st of October.