After what seems like a ridiculously long absence from the scene, skating games have finally made their comeback in 2020 with multiple titles being developed and released. The most anticipated titles are, without a doubt, Tony Hawk’s Pro Skater 1 + 2 Remastered. Luckily, the franchise has returned back into the hands of Vicarious Visions.

While I am familiar with the franchise, I never played the first two titles – my first game was THPS 3 on the GameBoy Advance. When the remaster was announced, it was a no-brainer for me to purchase this. So, how does Tony Hawk’s Pro Skater 1 + 2 Remastered hold up in today’s world of games and how is the experience for newcomers to these titles?

I was impatiently waiting for the game to be downloaded and installed onto my PlayStation 4 when I realised that the infamous warehouse demo – that was also made available early to pre-orders – becomes playable after a specific portion has installed. Needless to say, as soon as I could boot up the game, I grabbed my board and dropped right in.

From the get-go, even if the game hasn’t fully installed yet, it is more than evident that the game has received a massive upgrade across the board while keeping that typical 90’s touch to it. I checked YouTube to see what the original games and maps looked like, and it is incredible what Vicarious Visions have done with Tony Hawk’s Pro Skater 1 + 2 Remastered - to call it stunning is an understatement.

When booting the game up for the first time, it will ask you to calibrate the visuals, so the game will shine to its maximum potential, and rest assured: shine it does.  The game blooms with a beautiful pallet of visuals, both in colour and lighting - the overall upgrades the visuals have received compared to the original titles is nearly impeccable. The characters, animations and surroundings will all be instantly recognisable if you played the original games, but the visual upgrade makes everything a lot clearer.

One of the many recognisable parts for fans of the game will be the soundtrack: not only did most of the original tracks make it back into the game, but it has also been expanded upon with more recent tracks. The new songs that have joined the list fit the game very well, while the original songs have that extra blast-to-the-past touch for players who played the original games back in the day.

A small detail, but a most welcome one, is that you can continue to listen to the soundtrack regardless of having to load or reboot a level. I noticed - in the YouTube videos I watched - that restarting or loading a level would either start a new track or pause it altogether. 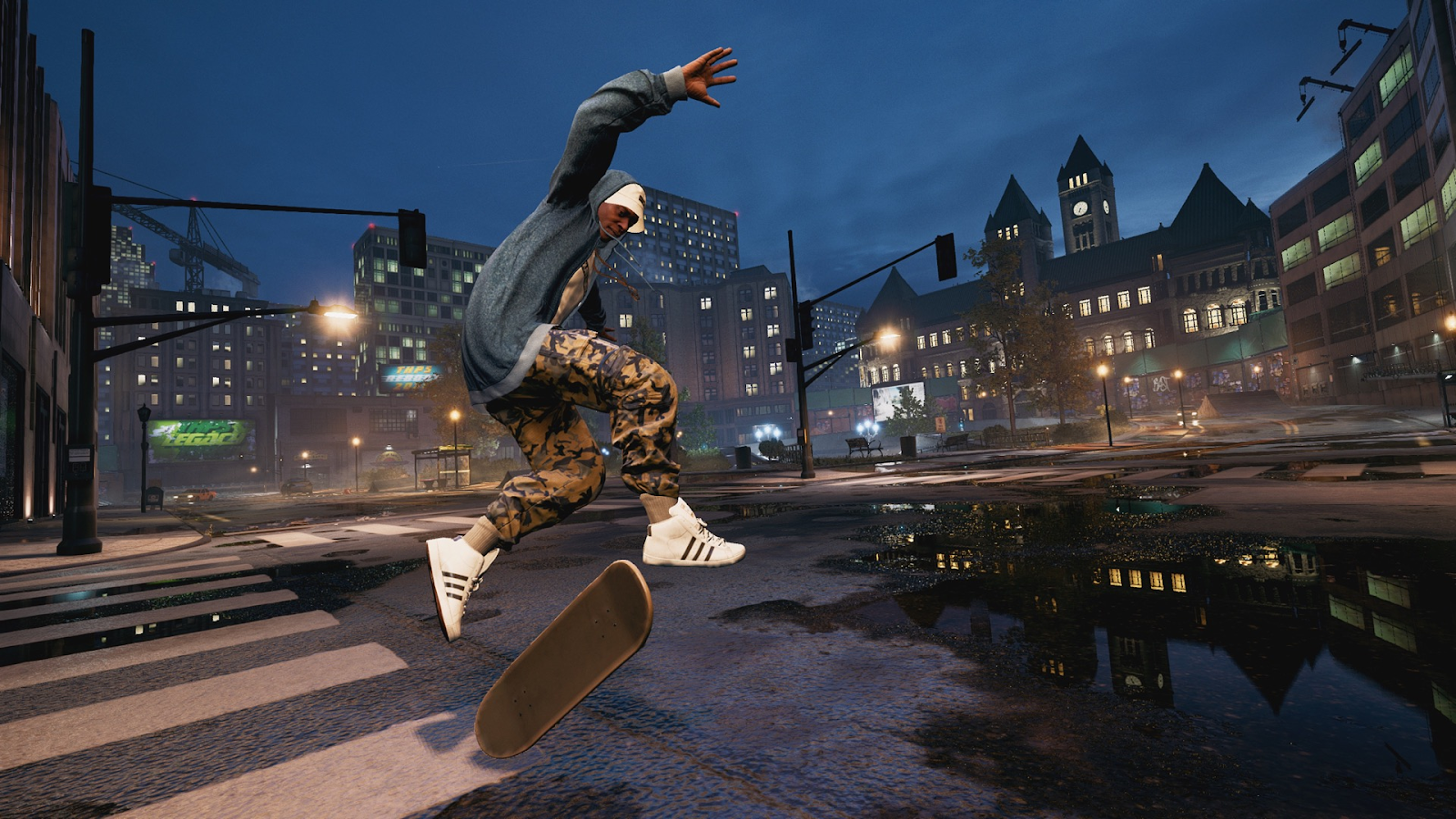 It looks good, it sounds good, it runs smooth... What about the controls? While I cannot compare the control scheme to the original games – as I have never played those – it is noticeable how the controls feel very old school. It is not a bad thing - far from it. As these controls are easy to get used to, I can’t instantly see how these can be improved. There is a bit of a learning curve, but the controls, in general, will come across very natural and easy to remember.

The gameplay is exactly what you expect of it. You boot up Skate Tours, start skating and try to complete the goals set per level. Through earning a certain amount of goals, you will unlock a new level where, once again, you complete the goals set for that level. While playing the game and completing the “Stat Points!” challenges for each character, you can unlock their skate movie as well.

Skate Tours also contains a separate “Ranked & Free Skate” mode, where players can choose between trying to get all the goals as fast as possible (Speedrun), Free Skate, or Single Session. Both Free Skate and Single Session give you free rein to skate and build up high scores without any specific goals to pursue, although Single Session will challenge you with the usual time limit. Seasoned Tony Hawk’s Pro Skater-players will fly through these levels and their goals – but not at the cost of enjoyment. For newcomers, it depends how quickly you can grow accustomed to the controls and how the game feels.

Other than the classic levels, the game comes with a variety of challenges that you can complete, which will grant you both experience points and cash that you can spend in the skate shop. In the shop, you can purchase an abundance of items to personalise your deck, as well as your skater. Playing with your custom created character and getting through the create-a-skater challenges will also unlock Officer Dick, played by Jack Black. If that isn’t a reason to grind your way through these challenges, then I don’t know what is.

There is also a multiplayer aspect to the game where you can play against other players in a variety of modes: Free skate, Trick Attack, Score Challenge, Combo Mambo, Combo Challenge, Graffiti, Horse, and Tag. “Free Skate” speaks for itself – you skate freely through the map without any competition. In “Trick Attack”, your goal is to get the highest score of all players before the timer ends. “Score Challenge” is similar, except the score is set and the first person to reach that score wins. “Combo Mambo” grants the win to the player that pulls off the biggest combo in the given time limit. “Combo Challenge” is the same as “Score Challenge”, but you will have to reach the given score through means of a combo.

“Graffiti” is a mode where you tag any environment you complete a trick on and it is up to you to tag the most objects by the end of the round. “Horse” is the age-old classic mode where you have to beat the score of your opponent, or you will receive a letter. The first person who completes the word HORSE loses the game. “Tag” is... Well, it speaks for itself - tag your fellow skaters and try not to get caught.

Lastly, you can build the skate park of your dreams in the create-a-park mode. You can build anything you like, how you like, where you like. Afterwards, you can share your creation with the world. Other players can check out your map, skate in it, and even change it to their likings. I struggled a bit with creating skate parks as sometimes I couldn’t place an object regardless of placing it in an open space, with nothing blocking the object. The controls in the create-a-park mode were also a bit of a hassle at first, but for players who live for these types of modes, they’ll stick to you like glue when using the mode frequently.

If there is anything at all that I can find that I am less fond of, it would be the slightly flashy UI. It can be a bit overwhelming at first, but you do get used to it. I had a hard time trying to complete some challenges because the text scrolls away so fast that I couldn’t see what I had to do, nor could I stop the scrolling.

Everything put together, Vicarious Visions has recreated THPS 1+2 in a way that I can only explain with the words “90’s” and ”perfect”. Going back to the past and bringing some classic gameplay to the future has been a genius move from Activision, with titles such as Spyro, Crash, and now THPS1+2 joining the list of impeccable remasters.

Received for review? No